Finally got all the parts required to get the Savage X going again last night, so set to it right away to get it up and running.

As said before i had already received a new cover and back plate from HPI themselves but held out on a few other bits arriving from elsewhere to solve several things at once instead of breaking it down again.

Reinstalling a Cover Plate and Rotostart2 Back Plate on a Nitrostar F4.6

First of all check the spring loaded pin is in position in the centre of the con-rod. When i initially tore this down i didn't realise the pin was there and it shot out with some force! Luckily it didn't get far and i managed to retrieve it, and as a double bonus, the spring stayed put in the con-rod.

I also found the easiest method is to hold the truck vertically (with the back end upper most) this allows you to drop the pin in and not worry about it falling out or inside the engine somewhere!

And to make the next part easier, rotate the engine to bring the piston to BDC (Bottom dead centre), by turning the flywheel. 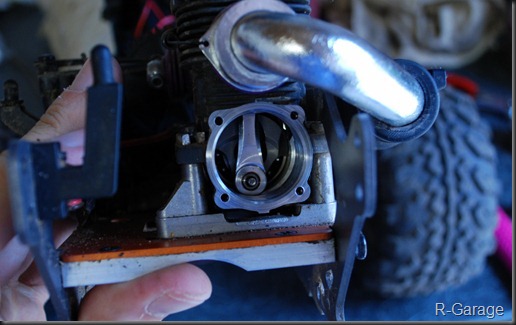 With the Starting Shaft located in the Cover Plate, position the slot/groove also at BDC as you will be applying this blind, the pin will of course locate into the shallow. 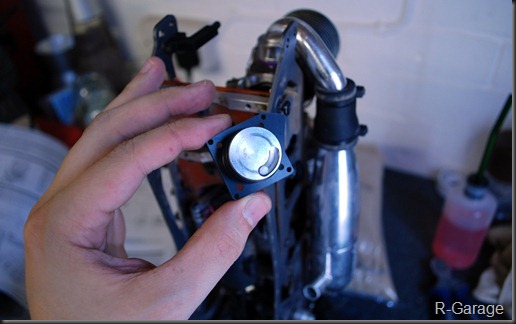 As you install the Cover Plate you will  need to tap it lightly to overcome the grip of the seal ring. Use something soft and blunt and only hit the plate itself, hitting the shaft will only transfer force into the con-rod and crank shaft and may damage something.

With the plate fully home, secure with the 4 cap screws and golden rule…

HPI Z159 (Green) Thread Lock is advised in the manual although anything equivalent should do the job. Also when using thread lock don’t squirt gallons of the stuff everywhere!

Even though i stress to use it, put a small amount along one edge of the full thread. Some people also advise to only dip the first 3-4 threads in. Either way it will create an ample coat across the whole thread as you install the screw. Putting too much in can sometimes effectively seize the screw and make it impossible to remove in future, or it doesn't dry correctly and therefore negates its useful properties! 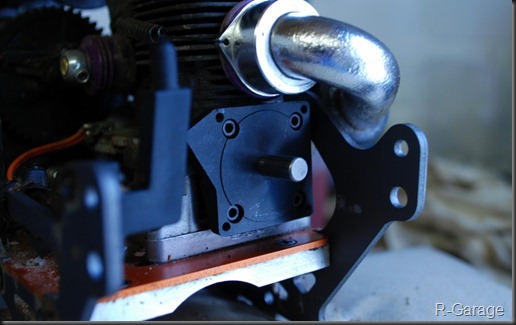 I found turning a thread or 2 at a time on each screw helped to pull the plate in evenly, finished off with about a quarter of turn to tighten them up.

Next job is to add the Back Plate. This comes as a kit of parts with the screws and an Allen Key. It doesn't come with the gears, they will need to be transferred across from the old Back Plate unless they have been damaged. 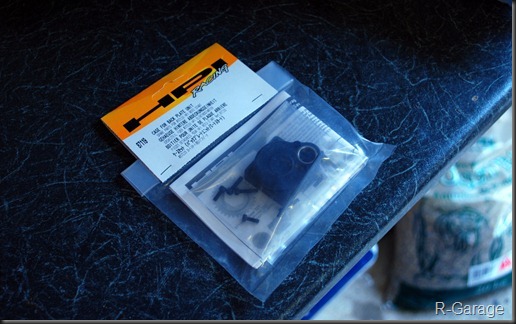 I added a light film of moly grease to all the teeth and contact surfaces on the gears, best method is to just rub a bit between your fingers and then rub it all over the gears and the inside of the casing and bushes. Should keep it free running and protect against dust and water as when i opened up the old one its obvious this is not immune to contamination. 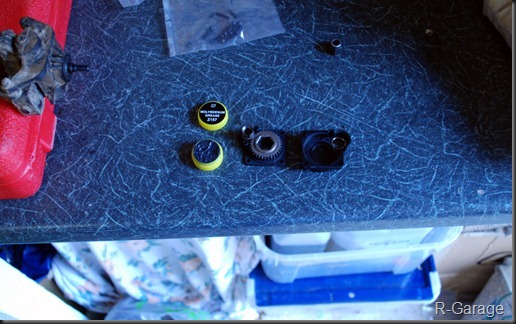 To finish off the Back Plate is assembled and fixed to the cover plate.

I started off by adding some Thread Lock to the supplied cap screws and noted straight away how much of a snug fit the holes are in the Back Plate to the screw threads. Most of the thread lock as a result was pushed back off the threads.

This made me wonder if this happened with the original installation and resulted in an inadequate amount of thread lock getting through to the Cover Plate and then working loose through vibration… although that doesn't amount the the failure of the material i admit.

Not an easy task to try and squirt it in! Either use a thin sharp tool to smear some into the threads, or just apply to, and run the screw into the thread and remove it again.

Also don't forget to put the One Way Bearing (OWB) back onto the shaft and it must be the right way round! in this case the tapered end goes up against the cover plate. 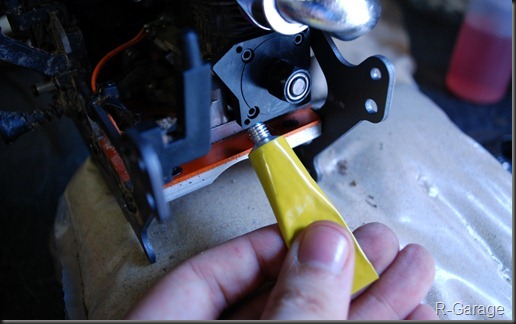 Last but not last the Back Plate is added. Only three screws secure this, despite the provision for a 4th in the cover plate. This is due to the gear that takes the shaft essentially being in the way.

With the case being made of plastic its very easy to go over the top and start to crush the case if you tighten the screws too much.

I tightened them as much as “finger tight” would allow and then did a full turn of the screw. The screws bit into the plastic and gripped, but you don't get that reassuring feel that it has got hold of it fully! So don't go overboard… 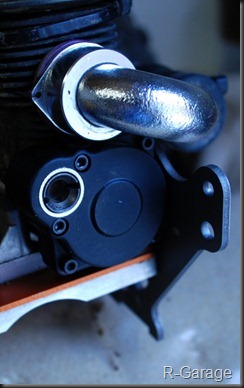 Job done, i popped the glow plug out and gave it a spin with the Rotostart, and it works beautifully again!

Think the moly grease has been a worthwhile addition as it sounds much cleaner and smoother than before when the starter is spinning the engine.

Either that or it was due to it being loose before!

Happy with the repair, i got the back end bolted back up and did a test start with engine, took a few spins but eventually coughed back into life, happy with that result, it would be rude to not go out for a long waited bashing session! 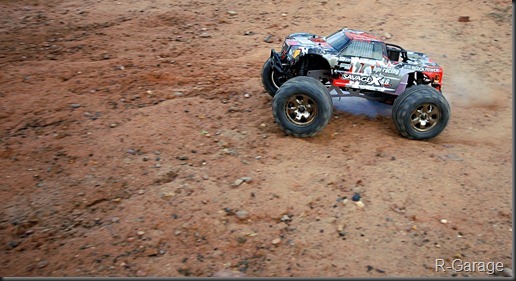 Running great and huge fun all over again, started without a hitch on the first blip of the Rotostart, so it must have deteriorate over a (short) period of time as it was getting harder and harder to start and initially had me thinking my tuning had gone completely to pot!

And her comes the “Just…” as per the title!

After a couple of tanks, the Savage seemed to be struggling and loosing power… not what i want after just getting it going again!

On a few close up drive pasts, it appeared then engine was performing, but the drivetrain was failing to do anything substantial…

First thoughts were a fried clutch or the inevitable stripped gear! So i pulled up and took the body off and attempted an evaluation.

Thankfully pulling on the throttle revealed all there and then, the teeth were still present and the clutch was still doing a fine job, however the slipper was converting all the engines energy into a flailing mess of nothingness!

It was so slack you could turn the gear with your finger and it would slip… so… back home i went!

I stripped the top of the gearbox and reset the slipper spring… it did seem to have loosened off slightly, so i set it back to the HPI recommendation of tightening it all the way and backing it off one half turn and it did start gripping again. However inspecting the Clutch Pad did show some significant wear and deterioration, I'm wondering if it has been a bit too loose on a half turn and wearing itself out too quickly?

A quick test run showed it was still able to perform, but does seem a bit groggy, so I've ordered some new pads for when it finally lets go completely!

Hopefully will get them for the weekend or it will at least hold out as with a bit of luck ill be off for a bashing session in an old quarry!