After raining most of the day and thankfully, clear skies by the time i got home, i thought it would be rude not to get out and play in the puddles and vegetation and make some nice big muddy splashes out in the field!

Happy as a pig in…., well, mud. The Savage was having no bother dashing through water logged potholes and providing entertainment with huge power slides over the wet grass.

As light levels started to drop, i was contemplating returning home but still had a half full filler bottle so thought i may as well polish that off to draw in a close to the evenings antics.

As i returned to my “pit area” i noticed a sort of “flapping” noise coming from the truck.

I carried out a few low speed passes and sure enough the noise continued, so i went in for a closer inspection, assuming a twig or something similar had got stuck underneath or in a wheel etc.…

As the truck pulled in, it coughed and stalled. In my wisdom of trying to suss the noise out i hadn't paid attention to the already bone dry fuel tank.

So i topped off with the fuel i had left and grabbed the Rotostart and Ignitor to fire it back up.

However when i tried to engage the rod with the starting block, something was clearly amiss. From the limited view i had inside the back of the truck it was clear that something had come loose, namely the block itself.

I decided to give up there and then and just loaded the Savage and my gear into the back of the car and headed off home for a full detailed break down. 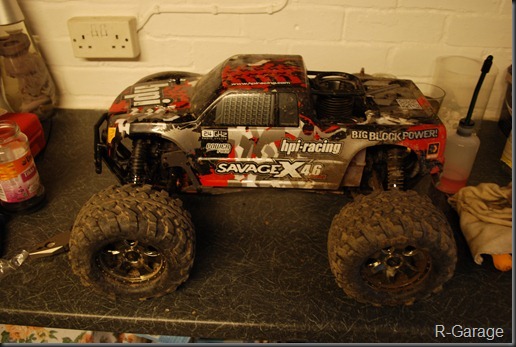 The initial view i had was as follows, there is clearly a void between the engine and the starter… 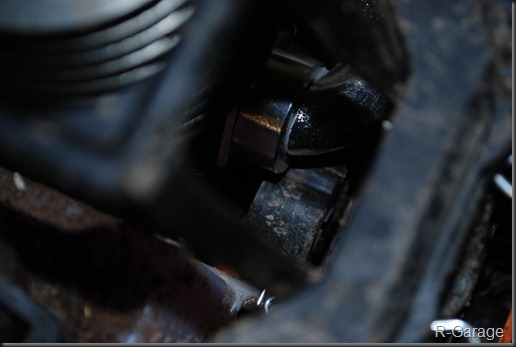 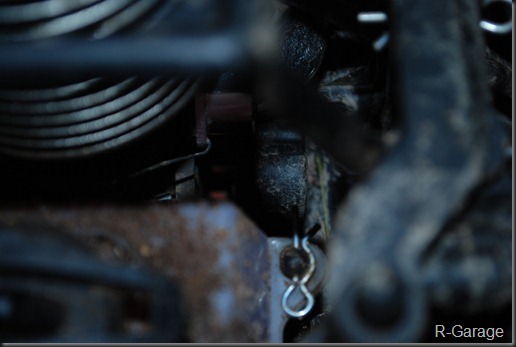 With the fuel tank removed it was now blatantly obvious that the starter had indeed come away from the cover plate! 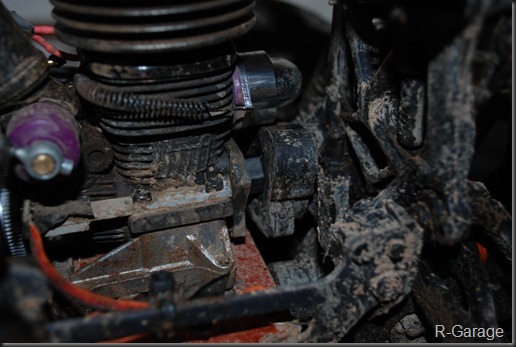 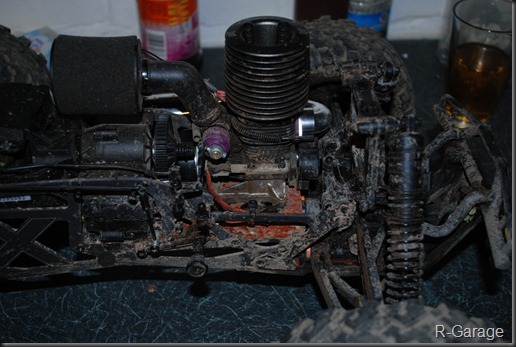 I was fearing an engine out job, but remembered the whole tail end of the chassis can just be unbolted, which is very easy and straight forward. 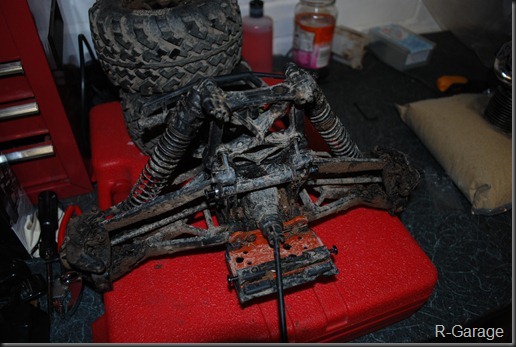 Now i could asses the damage… 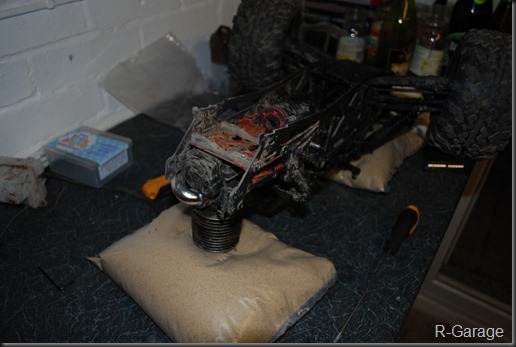 Sure enough… completely void of any mounting screws! 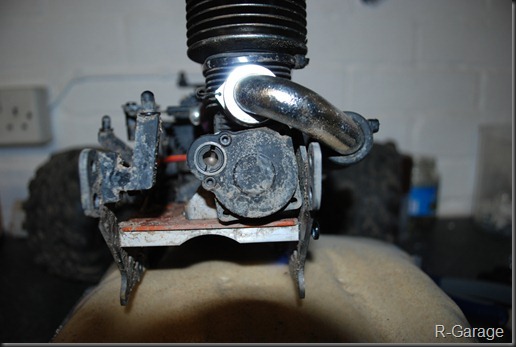 Simply loose and removed by hand… 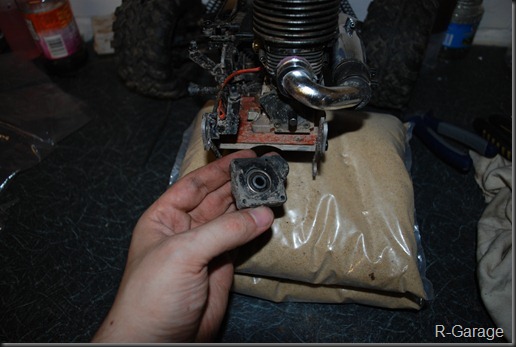 Damage had occurred on the starter casing with two of the lugs showing cracks. Luckily the plastic was damaged but not sprained, so i applied some super glue and allowed it to wick into the cracks. Hopefully taking hold and should make a strong bond.

In my usual manner i did manage to glue myself to everything else too! 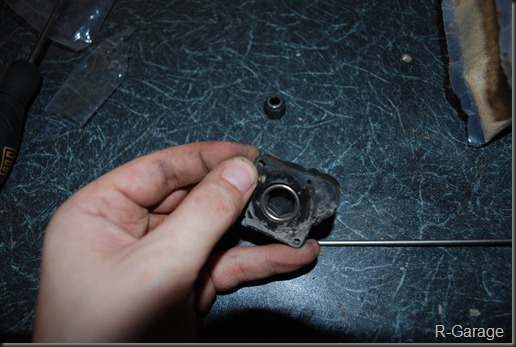 I stripped the starter down to inspect any other damage. Luckily the gears and bushings still looked in good condition. 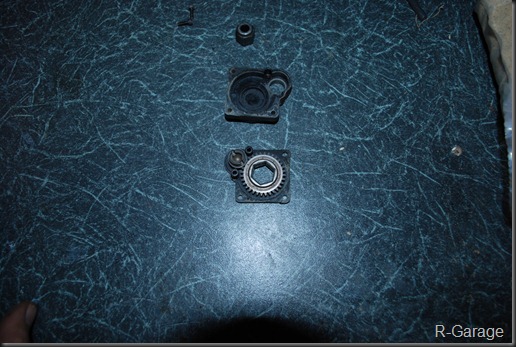 If the repair is a total failure… then its on to getting replacement parts. For one i need some new cap screws to replace the missing ones.

And this is where it gets worse!

My first port of call was to check the mountings to see if they had just made a bid for freedom or sheared in the cover plate.

Unfortunately the cover plate had other ideas… 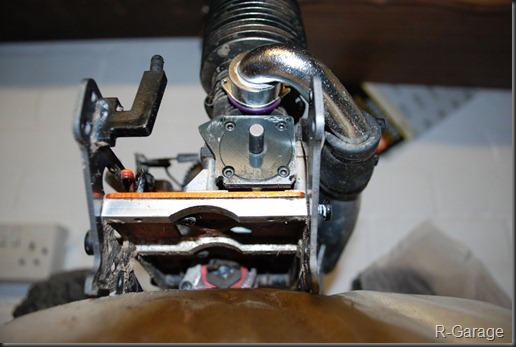 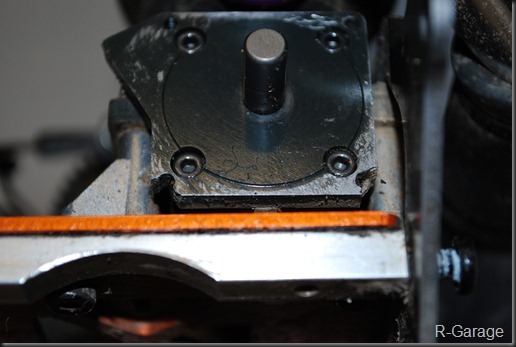 How long it had been like this i have no idea! Could have been like it from day one, and the remaining screws have just given up the fight.

I have a hunch this happened when the truck was built, and inferior materials may have also been a factor. Whoever constructed this truck/engine may have applied too much pressure to these screws and caused the metal to fail.

I would be highly surprised if this has happened through usage of the truck over the last week, as that area is exceptionally well protected!

Next job…. scan the instruction book for part numbers!
Ill also contact HPI to see what their take is on the matter.