With the arrival of the Savage X, no short work was made of removing the installed radio equipment from HPI.

I was thinking of testing the capability of the RTR equipment, but i really wanted to get my hands on using the DX3S, no bother, ill perhaps test it at a later date.

A big bonus with the DX3S is the inclusion of the 3rd Aux channel as i had intended from day 1 to install the Reverser Module to the Savage.

The Reverser Module comes in 3 flavours…

In hindsight I've worked out i could have purchased the module only and a 3rd servo as an individual item as the radios Aux channel takes over from the mixer.

Plugged into the receivers Aux port, the Aux switch on the radio switches between the hi and low position of the servo, which operates a sliding “lever” to engage the reverse idler in the gearbox.

Normally on a 2 Channel system the mixer would be employed, and the method is to hold the brakes for 4 seconds and the mixer flips the 3rd servo to engage reverse or vice versa. This in its own right is a minor safety system, due to the fact that the truck will be at rest without fail when the reverser engages. Running on the Aux channel does allow you to flip the switch whenever you feel like it, and to be honest i have caught it once or twice already before being completely at rest and have “crashed” the reverser! Luckily no damage, but a lesson learned to be a bit more careful.

The DX3S allows you to adjust the travel of all servos and this has been especially advantageous with the Reverser, as the construction of the control rod does not give it any nominal size or length. So i was finding that in the reverse position, the servo was attempting to pull the rod too much and was working hard against the “shock absorber” which basically consists of two small pieces of silicon fuel tube that are limited by two brass clamps. As a result the servo was jittering under the strain. Thankfully backing off the low travel down to 50% allows it to full engage the reverser and not have any problems. Result!

Another of my main interests with the DX3S and combine SR3300T receiver is the telemetry system, so i have indefinitely made a beeline to get this installed.

Unfortunately i ran into several problems when i attempted to get it fitted.

First and fore most the RPM Sensor mounting kit doesn't fit the Nitro Star F4.6 out of the box.

The first problem being, one of the two mounting plates with adequate slot spacing, is too long. With the sensor mounted it butts up against the Rotostart2 plate and the flywheel… 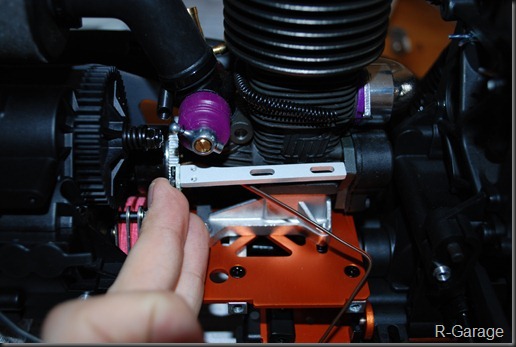 Thankfully not too much of a problem as the mount is made of aluminium, so is easy to cut down to size with a hack saw.

It is possible to turn the sensor board upside down, whether this will still work or not, and as a result the shape of the board allows it to move in closer, but i was now faced with the sensor being too high up, and once again not in view of the flywheel.

For now i decided to have an A-Team moment and attempt to create a mount from the available pieces to make it work.

This involved cutting one of the others down and attaching it to the main plate in order to keep it the same way up, but lower it down.

This helped but i don't believe it has gone far enough, and i don't have long enough screws to go any further, so this will be a future development.

Here is the final sensor mount, the insulation tape is to protect the contacts on the back face of the board shorting with the metal. 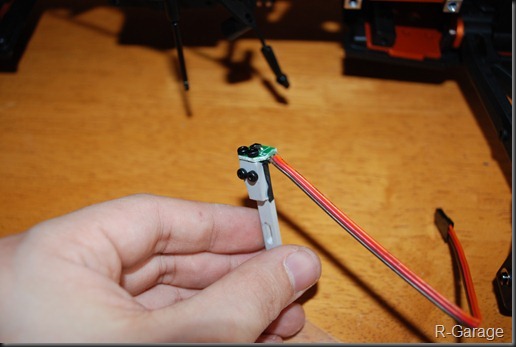 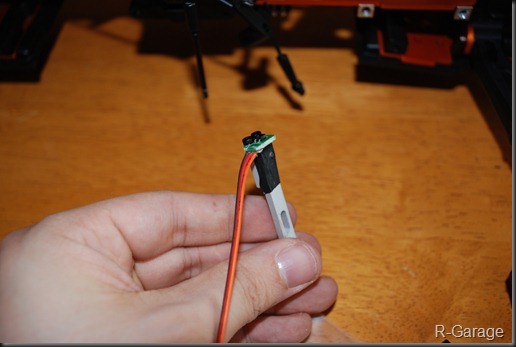 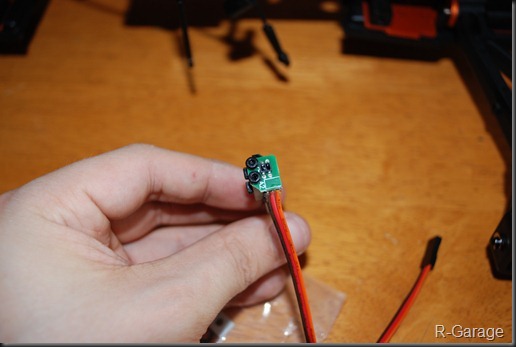 And here it is mounted on the side of the engine… 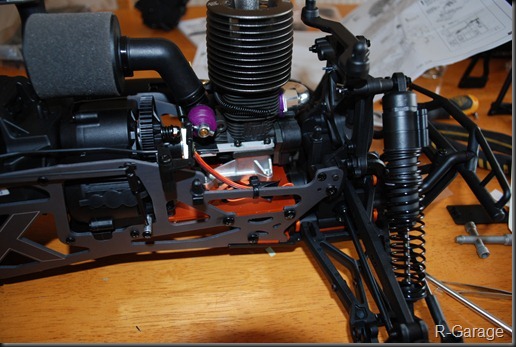 The next upset with this, and the fact that you can see the connection wires tie-wrapped to the chassis may be a bit of a give away… they don't reach the receiver box!

There is not much in it, but sadly not enough to allow an easy electronics install without having to do unnecessary and extensive work to the radio box, or fearing the wires getting snagged in the slipper or clutch pinion teeth.

So the next idea with this is to get an extension lead or just go ahead and extend them myself with some normal multicore wire. I am currently awaiting a reply back from Spektrum themselves on which way to go about this.

Second to this, the head temperature sensor is also in the same boat. With a nice simple method of a loop wire being wrapped around the bottom of the cylinder head, which also contains the sensor component itself, is simply clamped up by pushing a couple of silicon toggles along the wire loop to hold it still. But unfortunately this is also too short… a shame as the temp sensor was the most interesting element.

The wire for this sensor also feels much more sturdy, so I'm thinking it may be K-Type wire(?) so before i go ahead and look at modifying that i will await Spektrum's reply on the matter.