The sun is shining, I’m out of work early, i have a bag full of charged LiPo’s… would be rude not too!

Another bonus, i bloke i work with is a bit of a genius when it comes to correcting malformed bits of metal (advantage of being an engineer!) in my case, the bent Savage drive shaft. With a bit of heat work and a press, he managed to correct the shaft back into shape and retained its hardness absolutely perfect! Saving me about £25 in the process!

So it was off to the bashing grounds with both the Flux HP (wearing the battered X 4.6 shell) and the E-Revo to make its debut in the testing grounds. 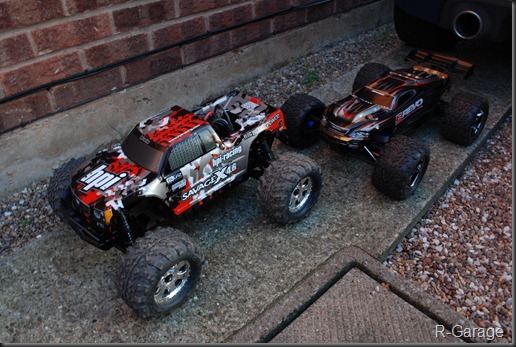 I really hoped to get some pictures of them both in action but managed to bust the LCD screen on my camera! So ill attempt that when i get it fixed.

The Savage was up first under full 6S power, the land is very dry and tough, so its not long before small dust clouds are rising into the atmosphere! For about 5 minutes anyway… as it then broke down!

Well, i say broke down, all i got from operating the trigger was the sound of a motor spinning round. Fearing the worst of a stripped spur gear, but then quickly remembering the fact the Flux HP has the metal spur gear, i feared the motor somehow had a fault.

As i made my way to the truck, it was instantly obvious and thankfully easy to fix. 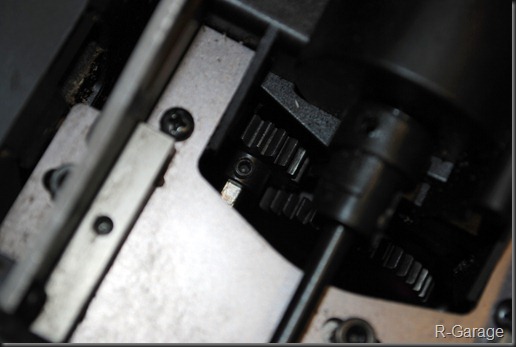 The grub screw had come loose and the pinion had slid along the shaft and “de-meshed” itself!

Being as I am only round the corner from home, i tend to not bring any toolkit items, but will start carrying a few basic tools i think, as back at the workshop all it took was an Allen key, and 10 seconds later it was ready to go again.

Never mind, at least i have the bonus of more than one model now, so the E-Revo got a good going over!

I have mixed opinions on the E-Revo’s off road ability. For one, running the 4S Carbon XX batteries it has bags of power, blistering acceleration and impressive top speed. The grip and handling are amazing, it is so easy to control this truck on loose ground. As i mentioned in an older post, the braking does need dialling back a bit, its very powerful, but just a little bit too much, and it can be easy to lock the wheels on soft and dusty area’s, which can end up having it stop sideways or backwards, need to get it like the Flux HP where it almost feels like it has ABS.

The dual servos on the steering, give it a massive boost when working against hard cornering, all it does is bite and turn. In comparison, it’s one thing i think the Savage is let down by. Sometimes the servo seems overwhelmed and can’t hold the position of the wheels and you end up under steering. The E-Revo doesn't suffer from that at all.

Hyper fast donuts can be had, and with a quick flick of the steering in the other direction, it will drift off leaving a huge ball of dust behind.

General bashing about over alternating terrain (tarmac, dust, sand, gravel, grass) at controlled speeds shows the E-Revo is a very capable circuit machine, i even got to the point where i had a small course mapped in my mind and continued to do laps of it, attempting to mentally beat my own lap times.

The only thing that’s slightly against the E-Revo is the ride height, I've always felt its more like a truggy than a monster truck, and it does show.

As you can imaging, it bottoms out quite a lot, where the Savage’s (and most likely its Nitro 3.3 brother) just glide across and eat up the bumps.

It didn't take long for the skid plates to be completely pot marked by rocks and such after hitting them, and sizable undulations in the terrain (such as buried boulders) cause it to buck about quite awkwardly if you haven't noticed them in time, again, the true monsters would just jump them or ride up on two wheels.

I don't, not like, it though, its a fabulous model and well worth the money, i just hope to get the 6S batteries into it soon and see what it can really do. It already pops wheelies with 4S under the right conditions, i think 6S will yield the same madness that the Flux HP see’s!

Also I'm hugely impressed on the sort of run times you can get from the LiPo and Brushless setups. As back in my younger days, 10 minutes of runtime from a 4000mah 7.2v battery, with a reasonably good and uprated motor, was almost myth and legend.

I was expecting this new fangled technology to deliver more power but only last as long, but with a huge combined 12,800mah and still pumping out at 14.8v i timed the truck from switching on, up until the ESC deciding the voltage was too low to continue, as just over 38minutes of runtime!

In one sense, when you are being careful and driving properly, rather than screaming round like a lunatic, the modern brushless setups have so much power at such lower throttle percentage, in proportion you are not demanding as much from the batteries, and you get the impressive runtimes.

Thoroughly impressed i am, its worth the extra expense to go Brushless and LiPo.