First night out with the E-Revo

With both Savages out for the count, i decided to give the E-Revo a quick going over. I had decided to dedicate the weekend to the new Traxxas arm of the fleet, but with the random and nice weather we had today, it would have been rude not to get out. 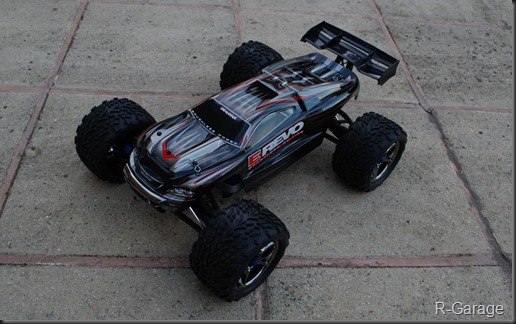 I started by installing the two bundled 8.4v 7cell NiMH batteries that come with the E-Revo kit. Lesson learned from jumping straight in with the 6S setup in the Savage HP! 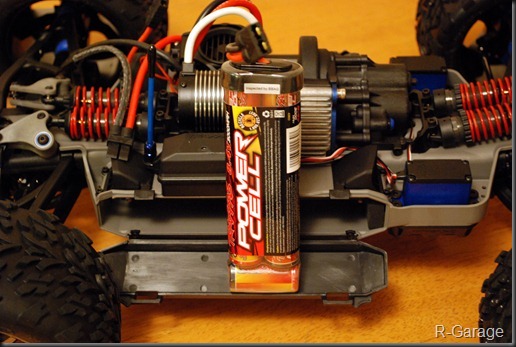 Onto the playing fields, straight line speed more or less was a bit dire! It was very “driving miss daisy” compared to the performance seen from the LiPo’d Flux HP recently. Even the motor itself sounded a bit bored!

But still, i managed to get a gentle break in of my own senses on how the E-Revo actually goes about the business of handling…. which is sublime!

Whether you think the trick suspension is just a gimmick or a masterpiece of model engineering, damn this thing can impress in the bends!

Now I’m no pro-racer and generally just enjoy trashing round, so handling is acceptable when the vehicle turns accurately enough when requested to do so, but the E-Revo is pin sharp in its control, the low centre of gravity and wide stance give this truck serious manoeuvring capability. The braking is also immense, i literally had some 30deg endo’s under some heavily applied moments. It perhaps wants backing off a little bit (using the Castle Creations Link - more info on this soon!) but its impressive non the less, and the car looks great under a heavy nose dive with the huge rear spoiler waving around in the air like a whale’s tail!

I have been used to my Savages being a bit hairy at speed, with body roll being a common demon which normally passes onto inevitable under or over steer, but tackling a narrow footpath with the E-Revo at speed and with a few practice runs makes it look like a giant slot car (if you squint a bit) I am seriously looking forward to getting it into the more testing off road area.

The NiMH batteries eventually wheezed their last breath after about 15minutes of constant full throttle, which wasn't too bad i suppose and ill perhaps keep them to one side if someone asks “for a go” with it!

Unfortunately my Overlander batteries have Deans plugs and i have no adaptor leads, but i have acquired a set of Orion Carbon XX packs. They are only 2S 7.4v LiPo’s but they do have a massive 6400mah capacity and specially shaped to fit the E-Revo’s battery compartments. 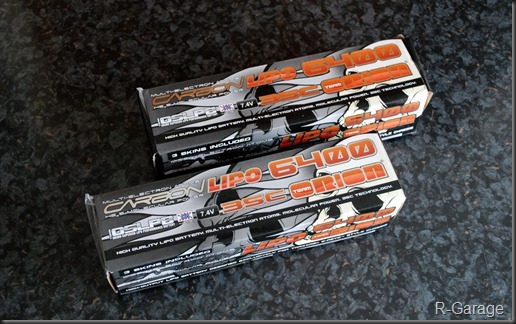 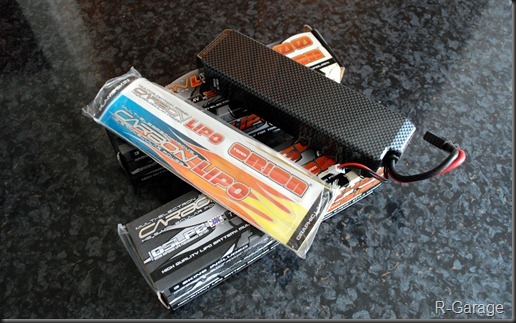 You do have to remove some of the parts from the compartments that are there to stop batteries moving about, this includes the foam pad, the retaining spring and the bracket. Literally a 10 second job, the pad is simply stuck on and peels off, the clip requires you to pull it down and push it towards the centre line of the chassis and the bracket has one Allen screw. 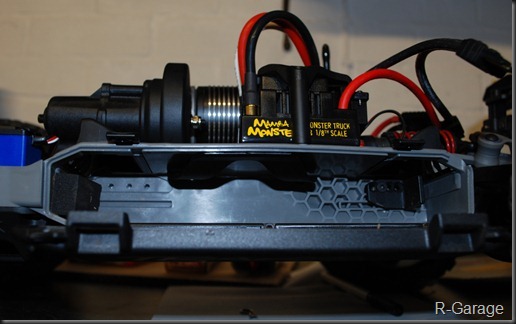 The battery then slots in perfectly, just safely tuck the balance lead in the spare space and the TRX connector leads through the slot provided… 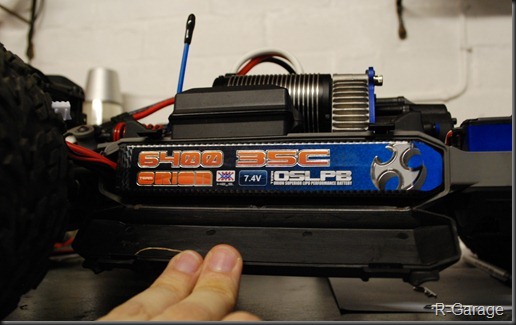 A match made in heaven to be honest, the sealed compartments are a far superior method to the HPI Savage idea of the battery “saddle bags” attached to the TVP Chassis plates.

Now the E-Revo really comes alive! You really have to experience the difference between the old NiMH technology and LiPo’s as the difference is astounding. The E-Revo now has some serious energy behind it, easily lifting the front wheels, if not as vicious as the Flux HP was, and the straight line speed is fantastic, whether it be grass, soil or tarmac the wheels are easy to spin, but thankfully it feels much more solid, much more planted. No sudden and scary back flips, but that is most likely down to the low C.o.G. and the fact that its only 4S. I'm sure with full 6S power (which ill try soon) it will become completely mental!

Sadly i didn't get to run the batteries to the cut off point as annoyingly the nights are rolling in and its too dark too quick, but i did get a reasonable 20minutes of run time and it still felt like it was ploughing on strong despite spending most of the time at full throttle screaming up and down the playing field.

As long as the weather holds out enough, ill get the Orion's pumped back up and see how well it does when the going gets a bit rougher.