Recently announced 1/18th scale RTR 4WD monster truck by HPI. Part number #105502
Not seen in any UK based retail shops/websites as of yet, but a US one shows it to be around the $180 mark but on sale at $99, available in late October. - UPDATED! SEE COMMENTS
Early buzz and conversation on the Mini Recon seems to have most of the sceptics comparing it to similar models and claiming it to be a clone of other manufacturers, as well as being constructed of inferior or poor materials. Also several complaints of “WHYS THIS NOT BRUSHLESS???!!!!111!!”
Seriously… not everyone can afford brushless technology when they just want something cheap to play with, also newbies to the game are much less likely to ruin something with a tamer setup, which they can learn with and then move onto more serious equipment.
My honest opinion… some people need to return to reality, of course its not going to be of the highest calibre! Its a cheap and fun toy, not a serious professionals competition model!
Sure it “only” runs a small and brushed 370 motor. However it comes with everything you need including a 7.2 NiMh battery and a charger, the TF-40 2.4GHz radio is also included, and most of the basic makings of a bigger truck, with sufficient ground clearance, shaft drive, a servo saver, ball bearings and independent suspension. One would also assume HPI will produce some hop-ups for this model.
I think the Mini Recon would make an excellent gift for the younger R/C enthusiast, especially as the small scale will allow plenty of “yard bashing” at your own home.
I also expect it could be a fun indoor model for those excessively rainy days… and for annoying the cat! 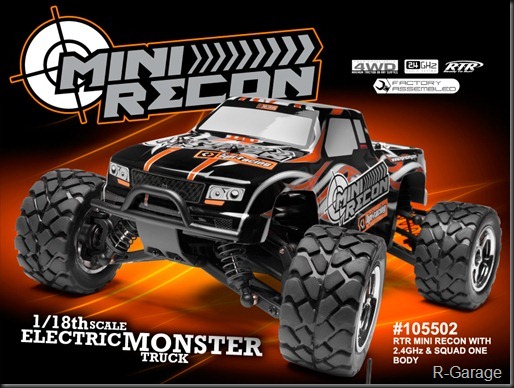 Full details at the HPI Website
Posted by Unknown