They say it comes in three’s

No truer word said when it comes to the Savage Flux HP!

But first… a quick review… (full one coming soon)

The HP has been the first of the new 3 to get the full test drive treatment.

Batteries selected are Overlander 3900mah 3S 11.1v packs. I wondered how these would fair with them being towards the budget end of LiPo batteries, but they seem well put together and have had zero charging problems with the so far. 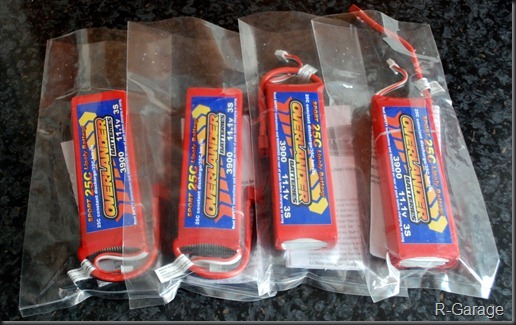 With a pair installed to the Flux HP and the ESC calibrated up on stands, i ventured onto the patio for a test run.

Here i got the first taster of the utterly brutal performance of the Tork motor when its under power from 6S worth of LiPo batteries.

In hindsight i was being a little under cautious and ended up pulling on the trigger a bit too much (about 50%), being used to the Nitro you forget how sudden an electric RC can pickup, and this was no exception!

The motor burst into life and the chassis literally took off into half a back flip, and flew a good 10-11meters across the patio slabs! My first crash and I'd not even gone anywhere yet!

In a state of shock and amusement, i reset the truck back onto its wheels and then proceeded with a bit more caution in order to get the trims corrected.

The instant feeling you get from the Savage HP is just the shear amount of grunt the thing has got, just taking it steady round the garden and getting a feel for the throttle has the motor yelping and lifting the front wheels off the floor.

After 10 minutes, id got the hang of going forwards and backwards, so went out to the street (late at night) so i could fine tune it to go in straight lines.

This gave me a chance to give the throttle a good squeeze and get the first experience of what the HP is capable of.

The motor sounds amazing under load! A sort of high pitched whine and a “rushing” sound, the back of the HP squats in submission and all 4 wheels start scrabbling for grip. Once enough bite has been mustered, the truck seriously shifts and before you know, it’s becoming a small dot in the distance.

Plenty of practice is need with the throttle, you cannot just tug and go with this thing as it will literally do a 1 and a half back flip from a standing start. Also the power has to be fed in when moving at pace. Again, hooking the trigger back will have it on the back wheels instantly, and failure to control the front end lifting will have the rear skid plate clip the floor, and the next thing you know, the truck is cartwheeling end over end!

The braking system is also seriously impressive, reversing the trigger causes the motor to work against the forward inertia, nose diving the front and scrubbing the tyres. The truck stops very quickly in a very controlled manner. Its almost as if it has ABS as the wheels never fully lock. A heavy braking period can easily be combined into a quick 180 tight turn and then rocket off in the other direction with the front wheels off the floor and the back wheels making dust clouds!

The following day i made way to a local playing field, thankfully deserted, to get some practice in before going fully off road.

The field is a moderately flat grass area, perfect for learning how the HP behaves, and get a grasp on the fine line of what constitutes a wheelie and what becomes a backflip!

Being as the rain came down a few minutes before hand, the wet grass also provides excellent substance for power slides and impressive plumes of moisture from the tyres at speed.

And then it went wrong….!

One long sweeping high speed corner and i came too close to the football posts in the fields… a loud “clang” ensued and the truck came quickly to a stop and to rest on its side.

As i got to the truck, one thing was certain… one of the rear wheels was facing the wrong direction!

A quick evaluation there and then revealed that the link rod/turnbuckle had snapped at the plastic end piece. So i duly limped home… 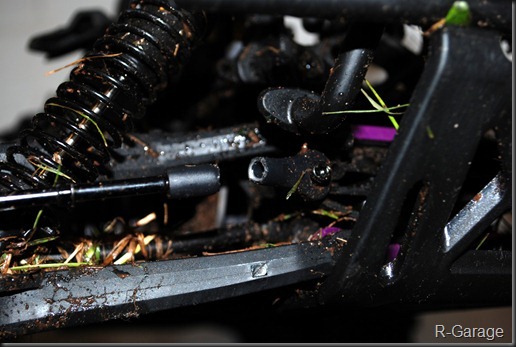 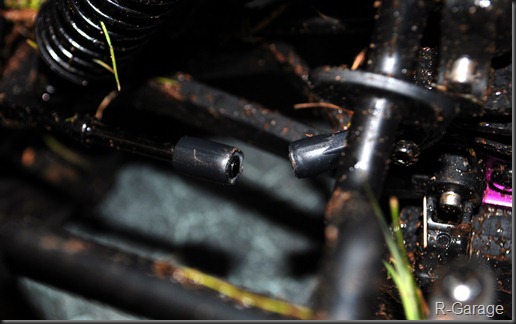 Other than the spring being slightly dislodged from the shock, no other damage appeared to have been sustained, which pays homage to the Savage’s build quality once again.

Sadly, i have no spares! So they are on order. However the Savage X of course shares the suspension setup… and of course, the linkages! So its Nitro brother gave up its parts for the cause! 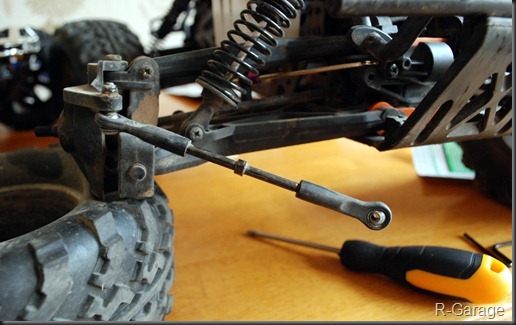 Fast forward 24 hours (with the loaned parts) and a couple of LiPo’s ready to go, i decided to take it up a notch and venture to the wastelands where the Savage X gets most of its usage.

In this environment the Savage Flux HP is really an amazing machine, the effortless amount of power and torque has it thundering across the terrain and storming up sizable inclines like they are small bumps… normally followed by significant air time!

Very precise throttle control is required when in sandy or loose gravel areas as too much power will simply create dust clouds… and a back flip as per usual! But with the right amount of power will have dust streams, power slides and impressive “wheel-spin-wheelies”, as well as mountains of fun!

One main curiosity of this outing was to evaluate the run time of the installed Overlander batteries, and all was well (and mostly impressive) for about 20 minutes, when suddenly after a landing from a jump the truck seemed to behave in a strange manner. The jump wasn't a heavy landing nor did it come into contact with anything, but suddenly one of the rear wheels had lost alignment again… and it wasn't the left hand side, where the link rod had been damaged…

On first look, it was a link rod failure again, or so it seemed. On close inspection the mounting point on the upright had actually failed! 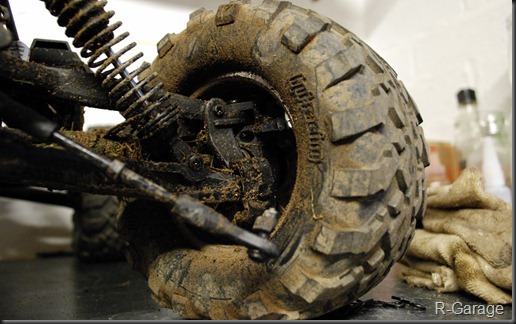 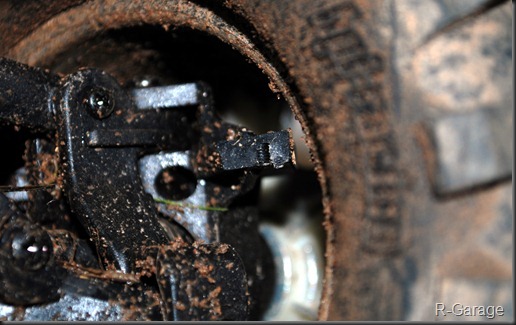 Rest of the upright still attached to the link rod… 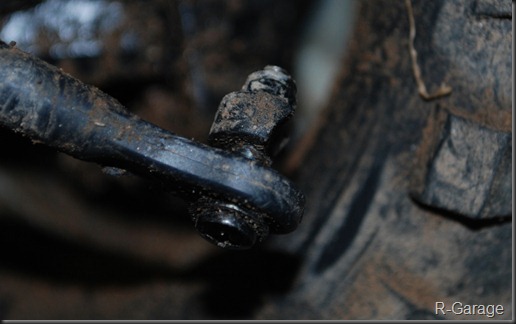 Then a stroke of luck!

With the wheels off i noticed the uprights are ambidextrous. Meaning its the same part for each side, as confirmed from the manual. Part number 85048. 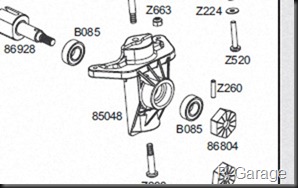 Damaged upright, but with the intact lug as if it were to be installed on the other side. 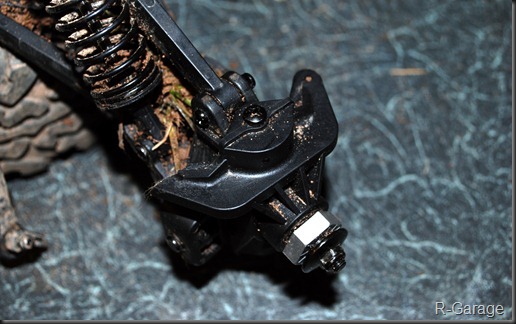 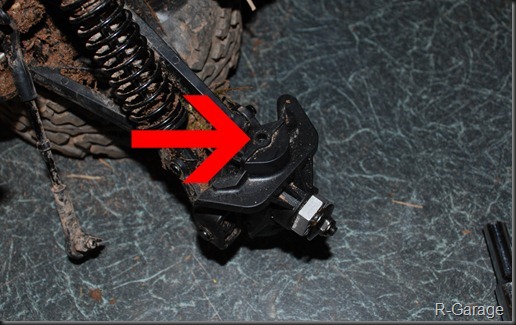 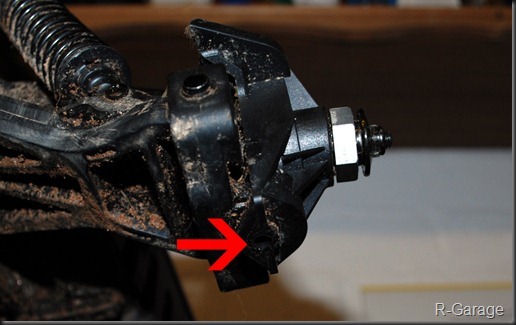 Also remove the hex hub and nut if they are there. Be careful you don't loose the alignment pin!

The upright with the axle will then come away… 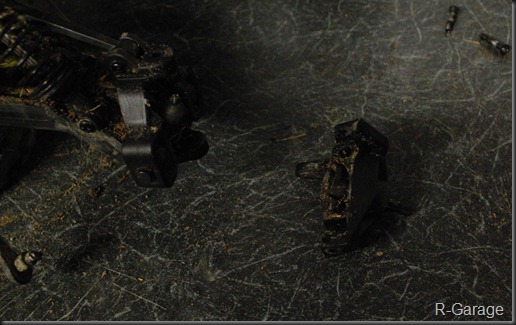 The link rods will need to be removed and retained on the side they came from. You cannot swap them between left and right due to the way they are constructed.

Look at the rod carefully and note the alignment of the ball in the socket. There is a round end and a flanged end. The flanged one is the face that clamps against the relative surface.

A screwdriver and a hex wrench are required to remove the link rod from the upright. Be careful not to loose the washer that is with the screw. 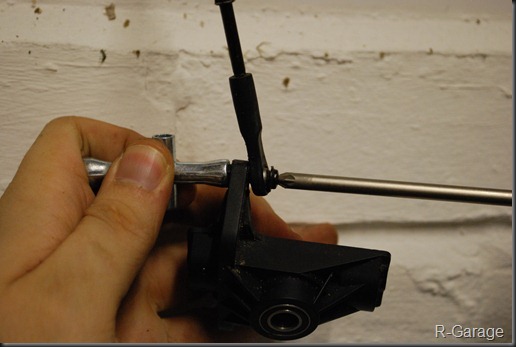 With the rear suspension in a state of strip down, i decided to give everything a quick check over. Namely the suspension strut from the side that took the force of the pole crash that damage the first link rod. Thankfully it’s still fully functional and in good condition.

With the drive shafts loose and wrapped in grass from the field bashing, it would have been rude not to clean them up, and this is when i discovered this… 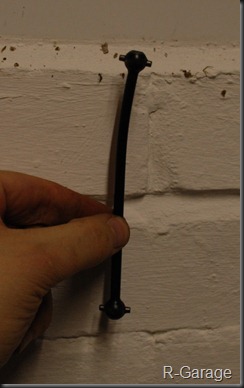 I think i underestimated the amount of force that the truck sustained during that collision to bend a steel shaft in such a manner!

Its a miracle that nothing else was damaged more seriously! But this will require correcting before running the truck, as trying to keep this going will soon destroy the axles and probably the diff through vibration.

Ill attempt to straighten it tomorrow, other than that, it'll be new driveshaft's!

With a bit of luck the HP will then be able to live a happy life!