I've scratched my head, I've pulled the engine out, I've stripped it down, its been sealed, the carb failed, that was stripped and rebuilt, I've spend several hours trying to get the thing to run adequately… but finally… my Revo 3.3 is about ready to go!

One thing i have learned with this engine is how incredibly sensitive the adjustment on the needles is! I've spent hours resetting them to the factory settings, and then doing defined fractional turns to try and get it to idle or even rev. Until i finally hit the nail on the head that these turns cause a massive step change in the engines operation, and as a result you only need to make the smallest adjustments to alter its habits! These small adjustments, as a reference, being a rotation that is as much a turn as the screwdriver slot is wide.

Its a bit annoying actually, as being primarily a hobby model rather than an outright performance racing machine I'd have expected the adjustments to be a little more  “ranged” if that's the right word to use. The Force 4.6 in the Savage X is a prime example of this. As that engines been nothing but a dream and a doddle to tune and keep running perfectly.

But anyway… it idles, and it revs and moves, although it does cut out at the minute when decelerating back to a stop, however i don't have enough running area at home so will have to get out to my bashing grounds and get it adjusted properly where i can do some speed runs. 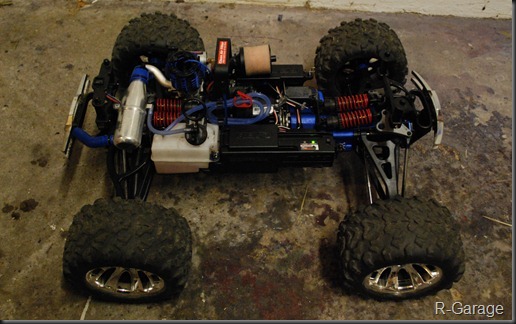