Well i set my mission for this weekend to get my Revo 3.3 up and running and finally out and about.

I had already come to the conclusion that there is an air leak somewhere, that much was obvious. The engine cannot hold tune or idle, and just rev’s into oblivion if you are not careful!

So the final straw was to remove the engine from the truck. Thankfully, a very easy and straight forward process as the 4 cap screws are accessible from the top of the engine using a long Allen key (the supplied one is sufficient). Release the grub screw from the muffler mount, disconnect the EZ Start and disconnect the linkage for the throttle. Its then just a case of manoeuvring the engine out of the chassis. 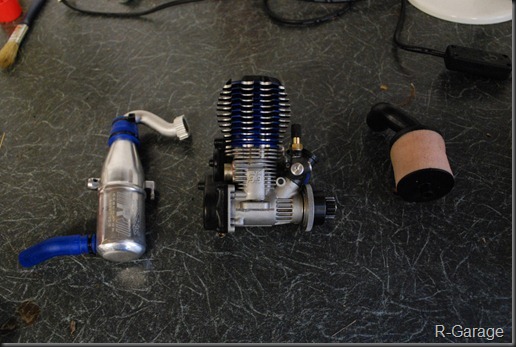 The next stage was to try and evaluate what was going on. I started by removing the EZ Start assembly and back plate. This straight away started to show that oil/fuel had been making its way out (and air in). 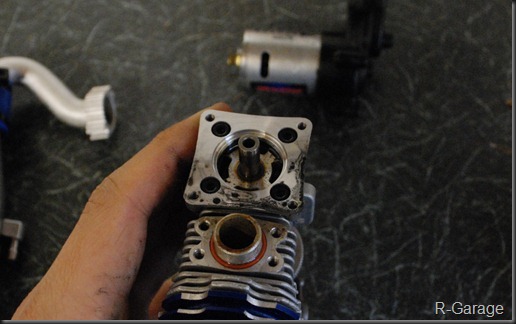 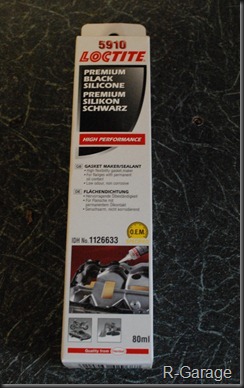 Ensuring a nice little seal appearing around the joint. At this stage i was also amazed at the lack of finishing on this engine, as there were some quite sharp burrs still present around the machined areas of the engine parts. I mainly sorted those out with some 180 wet and dry paper and some diamond files. 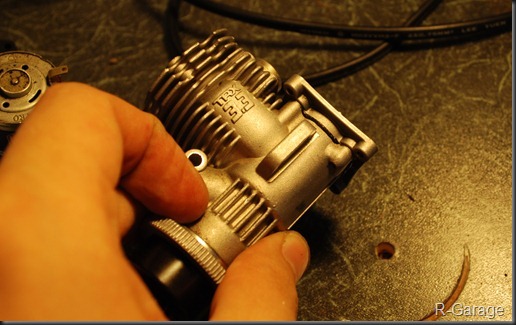 I sealed the carb and the EZ Start in the same way, and a small amount under the head where it clamps to the block, although as far from the head gasket as possible, and reassembled the engine.

I left it for a while for the Loctite to cure and then made a test rig for fuel and power for the EZ Start.

Once again, it failed to run in the desired manner, and after an awkward start, would attempt to rev to infinity!

Hoping i wouldn’t have needed to go this far, i set about removing the clutch and flywheel to check the bearing.

Applying some soapy water around the bearing face, and blowing through the carb (with all other holes blocked off) confirmed the worse. The leak was coming from the bearing! 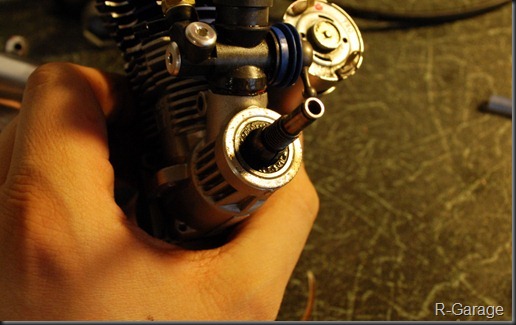 I shouted a few choice profane words, and then set about doing a complete strip down of the engine.

To get that bearing out, it is a literal “nut and bolt” rebuild. But on the bright side that bearing was easy to remove with a few swift taps from the reverse side. I gave it a thorough clean and then applied a very light film of Loctite around the bearings seating face and diameter, then tapped it back in, also again, a thin film to the inside of the bearing for the crank shaft.

With this in place i reassembled the engine and allowed it all to cure and did the soapy water test again.

Success! No bubbles coming from the bearing end.

Happy with the results i rebuilt the clutch and flywheel and installed the whole lot back in the chassis. Feeling nervous and confident at the same time i put half a tank of fuel in and went for broke.

The engine attempted to start, but was doing nothing but popping and farting. I ensured that the needles were in factory state, which they were, and attempted adjusting the idle screw a small amount. Now for some reason i think i may have stripped it! Although i have been very careful as its a plastic body with a metal screw, turning the screw doesnt seem to have an over all effect on the positioning… damn it!

However, manipulating the throttle a little bit did allow the engine to finally start, and finally it will stay at a constant speed! As opposed to just stalling or going nuts!

So at the most a success, but I'm not there yet. Will have to do a bit more testing and work out if that body is no good.

To try and make a better day of it, and with no batteries available, i stuck a spare standard spur gear in my Savage X (stripped the last one and was contemplating a metal version) and go out while there was still enough light before it got dark.

I gathered the bare essentials and set out to my bashing grounds, fuelled up, inserted the Rotostart and went for the start up…

A quick strip down of the back end with me fearing another bust Rotostart (see older posts) turned out to be the One Way Bearing (OWB) which had just completely failed.

Instead of locking onto the shaft when its spun, it just aimlessly does a grand total of nothing. This is the first time i have seen one of these fail! But trust it to be on my Savage!

On the upside, i might be getting my hands on a second hand HoBao Hyper 7 this week!