Not much of a grand project as of yet, but worthwhile keeping an eye on if you intend to do the same conversion to your own Revo 3.3

If you aren't familiar with my Revo’s past, the bottom line is regardless of the time and effort i have put in, i just cannot get the standard TRX 3.3 engine to run satisfactory at all, and as a result i have still not ran this truck in anger since i have owned it!

You will find its history by clicking here!

The last thing i ever wanted to do was replace the engine, as i would have loved to see what the TRX unit was capable of, but with me significantly scorned due to all the problems and an opportunity to obtain an engine that i consider to be of superior quality, that is all now history!

The engine i have selected is the O.S. 21TM 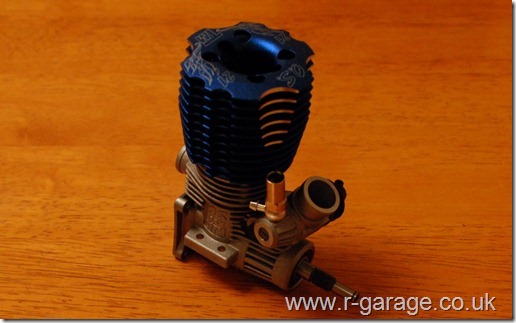 A name that is synonymous with the R/C world, and i expect to provide more favourable results.

I could have chosen from a couple of direct fit engines. The other most well known being the Picco .26, however i have personally not used a Picco engine so cannot comment on them via previous experience.

O.S. however, i have used many times in the past and never had a disappointment, and being as this one came up with a good deal, i couldn't refuse.

On a normal day the Picco would be substantially cheaper and i would have been tempted otherwise, but for the sake of a few quid more i got the O.S.!

First things first that stand out with the 21TM is the Type 11k carb. I had never been a fan of the composite unit on the TRX engine from the word go. This was further tainted when the idle screw threads stripped.

In which case, i have no doubt was a fault of my own actions. But that's a self confessed fault by someone who has experience with these things. Had i been a complete newbie to the game i would have been pretty upset by something like that.

The carb on the 21TM is made of aluminium. Some may argue this is not a good thing and much prefer the newer composite carbs, due to the fact that they do not transfer heat as readily as the metal ones.

While I'm not going to argue this point, the standard TRX carb does not feel very well designed at all (stripped threads aside), the slide in both my carb bodies was a very awkward and jerky affair, sometimes it would stay open slightly even with the tension spring pulling against it, occasionally i would hear it snap back closed when it overcame whatever was obstructing its movements…

The O.S. Type 11k carb however is fabulous in comparison. Sure, it will transfer heat more readily, but that's never been a problem for me in the past, and i cannot see it being a major detriment to me in the future!

It is substantially more rugged, better positioned (more on that later) and all the fittings just have a feel of quality to them, and the slide action is silk smooth. It actually feels like a proper precision component.

The 11k also has a 3 needle setup. Which of course makes it a bit more intricate to tune, and worst of all, easier to mess up the tune!

However as most people, i don't intend to alter the mixture control and will go about as most would, and concentrate on the basic high and low speed needles.

To me the mixture control is only there for the really hard-core of R/C masters. Most bashers will get away with not needing to touch it.

So today i geared up to get the two swapped over, and to be honest is a quick and straight forward thing to do. 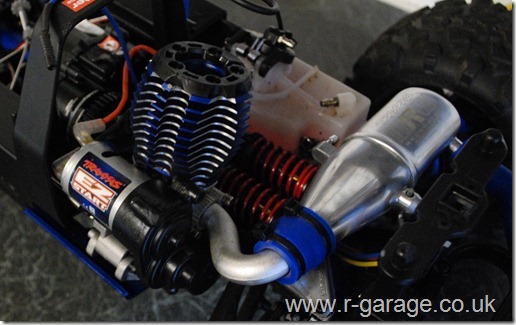 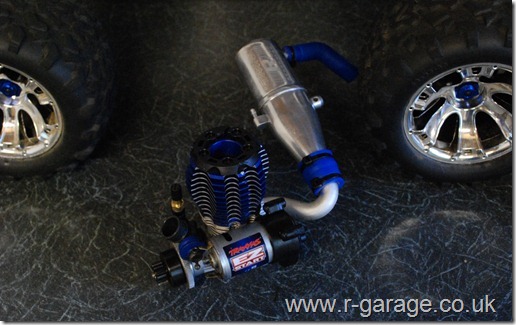 EZ Start and exhaust off… 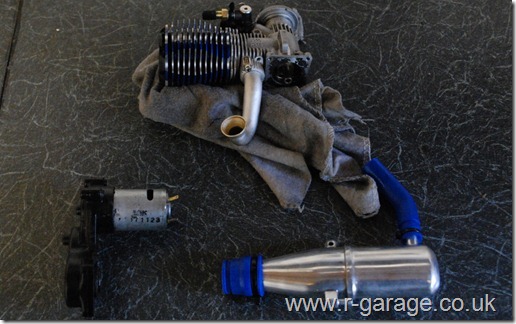 Clutch and flywheel off… 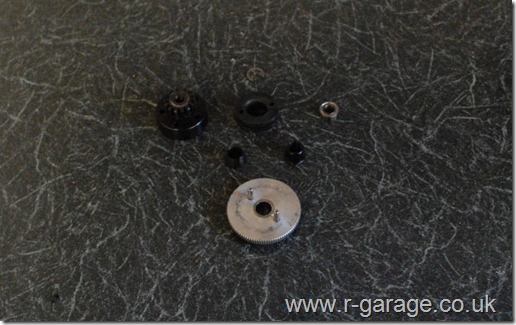 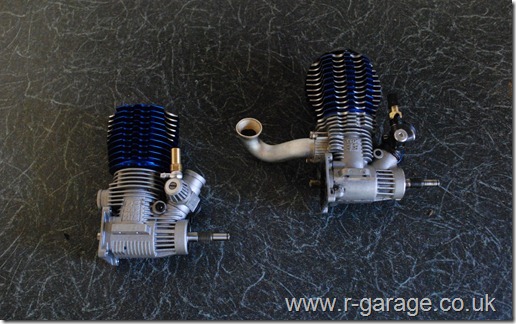 Then just a case of bolting everything to the 21TM. This is superb engineering by O.S. as there is no need to swap or change anything, all the original Traxxas parts just drop straight on… 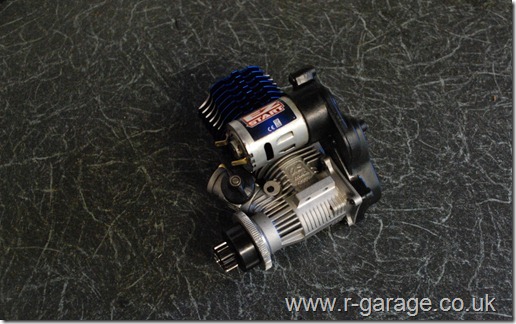 Next to add the manifold. Again also engineered nicely as the flange is shaped to fit around the starter… 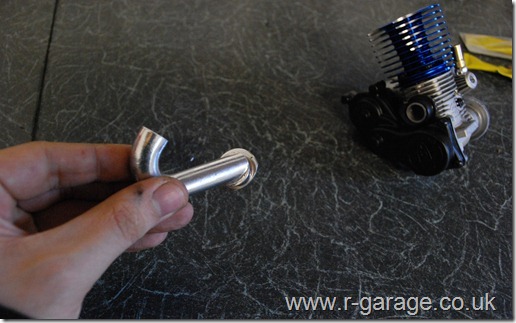 O.S. also opting for the more common spring retention rather than bolting it to the block… 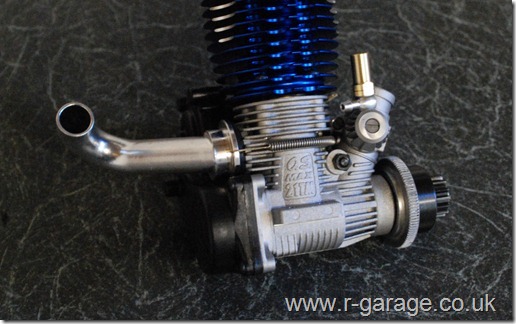 And into the chassis. I removed all the linkages in order to make a fresh start… 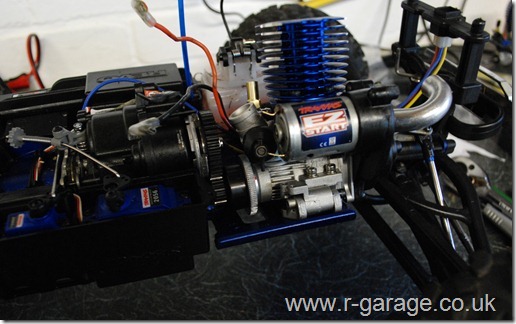 With the linkages and mesh suitably set, i came across a small problem with the O.S. manifold.

The original Traxxas one has a flared end, and the silicone connector is also suitably shaped. Honestly, this is a good idea as it really helps to seal the exhaust system.

As a result it will not grip the O.S. manifold and just slips straight back off, so i will have to obtain a bog standard coupler and try and work round the flanged end of the muffler.

That said this is about the only bad thing about the O.S. setup so far. 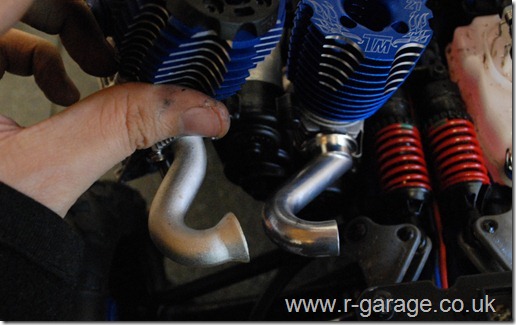 Going back to the position of the carb on the 21TM, it has substantial clearance over the spur gear compared to the TRX 3.3

I swear the filter pipe actually catches the spur gear very slightly, and is incredibly awkward when trying to reattach back to the carb. 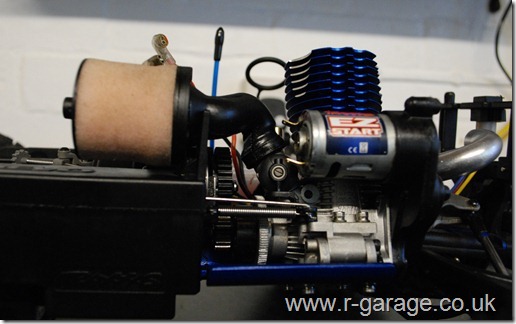 So there we go, its in and linked up, but not ran yet, just need to get that muffler attached before going any further… 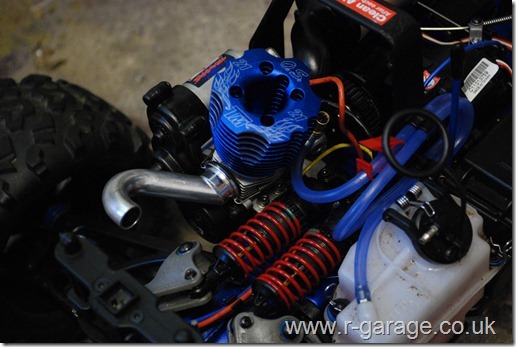